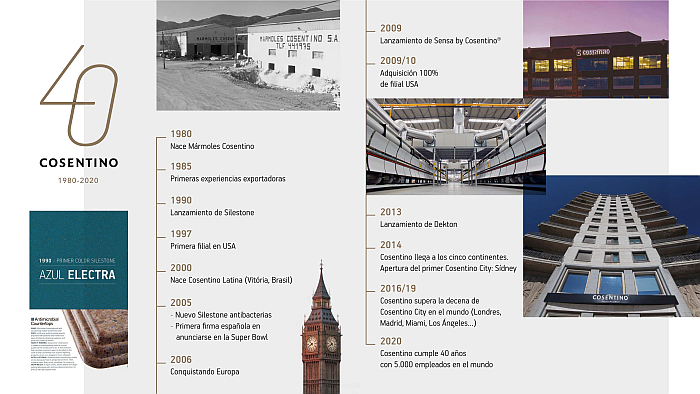 05.05.2020 Last April 14th, since the creation of the commercial company Mármoles Cosentino S.A., genesis of what ended up being Cosentino S.A. and finally Cosentino Group, 40 years have passed. In these four decades, the Almerian group has managed to become an international entity. And with a turnover of more than 1.1 billion euros in 2019, implementation in 40 countries and almost 5,000 employees worldwide, more than half located in Spain.

Successor of a small marble processing workshop in Macael, the second generation family transformed that small company of 1980, with 17 workers, into a leading global firm in the production and distribution of innovative surfaces for the world of architecture and design. It was a journey full of disruptive and pioneering milestones such as the creation of the Silestone or Dekton brands. And the conquest of the North American market or having been the first Spanish firm to advertise in the largest television event in the world, the Super Bowl (2005).

On this intense 40-year journey, the first big moment was the birth of Silestone in 1990, the world’s leading quartz surface brand. The prestigious Time magazine considered Silestone in 2004 as one of the most important innovations of the twentieth century. Thanks to the creation of this unique and differentiating product, the company began its intense internationalization process both in Europe. With the subsidiary Cosentino Northwest Europe based in the Netherlands, and in the United States in 1997. Step by step, and as early as the 2000s, Cosentino Latina was born in the Brazilian city of  Vitória, being the first manufacturing installation of Cosentino outside Spain, specializing in granite. In 2009 another great milestone in innovation came for the company. It was the launch of  Sensa by Cosentino, an advanced range of natural stone with exclusive anti-stain protection.

After years of growth and international consolidation, Cosentino reached five continents in 2014 with its entry into South Africa. Thanks to its increased presence in Europe, Australia, Asia, North America. The international expansion of Cosentino has been marked, during all these years, by the opening of Cosentino Centers, innovative commercial and distribution facilities. And Cosentino Cities,  an advanced and technological exhibition concept located in the heart of major cities of the world.

The multinational Cosentino again scored a before and after in the industry,  in 2013, with the development of the ultra-compact surface Dekton. This is a unique product in the market and that has  put its place an absolute revolution for professionals in the sector.

During all these years, Cosentino has based its development on international expansion, the constant commitment to innovation and R&D, security and honesty. Much of these values have made up Cosentino DNA. A vision of the company and the work present in each of the almost 5,000 current employees of the group, and that form another of the fundamental pillars of the company’s trajectory: its human capital. A commitment to attract and train the talent of professionals, young people, many of them Almerians and Andalusians, who demonstrate their know-how by leading teams in countries around the world.

Likewise, the leadership achieved by Cosentino would not have been possible without the trust placed during this time by countless suppliers, collaborators, partners, customers and the media. One of the basic missions of the company has always been to generate value for its entire chain, for all its stakeholders, and grow an entire sector internationally. Therefore, Cosentino continues to seek to imagine and anticipate together with its customers and partners, the most innovative decorative and design solutions that inspire people’s lives.

Precisely, both Cosentino’s own workers, as well as the firm’s clients and collaborators around the world, will be the main protagonists of this 40th anniversary. Until the end of the year, Cosentino will carry out different initiatives and internal actions whose objective will be to recognize and thank these groups for their fundamental contribution in cementing the company’s trajectory.

In the words of Francisco Martínez-Cosentino Justo, President of Cosentino Group, Together with my brothers, we wanted to create a project that was lasting, sustainable, and that would generate wealth for our nearest community and our entire sector. Those first dreams have been fulfilled. But the journey has been complicated, with very hard times. These months we’re getting to live another one of them. An unexpected and profound global health, social and economic crisis, which will surely transform us all. This 2020 has not brought us a favourable context to commemorate our 40 years of life as such.

However, it is precisely in this type of situation, that we must look further. It’s time to honor all those professionals, like our own employees, who have followed and follow at the foot of the canyon while keeping our day-to-day lives, even saving lives at the risk of losing theirs as the heroic case of healthcare professionals and law enforcement. But it’s also time to keep it, to be strong, positive and to send a sincere message of optimism. We are experts in comebacks… in Cosentino, in our province, our region and our country. All together and united we will get through, no doubt. And, therefore, we want to continue to celebrate in the coming months, as far as possible, this birthday with all ours.