With new products and a new motto – OpenUp, Vauth-Sagel was celebrating Interzum successes.

11.07.2019 Vauth-Sagel appeared at Interzum 2019 with a new motto and new products – and is drawing a very positive conclusion following the trade fair. After four successful days in Cologne, Managing Director Claus Sagel said that OpenUp reflected the spirit of the times. This assessment impressively confirmed the response to Vauth-Sagel’s new openness. A total of around 2,000 customers and partners visited the stand of the family company from Brakel-Erkeln, which also received a certificate for its 20th participation in the world’s leading trade fair from Gerald Böse, the Chairman of the Management Board of Koelnmesse. 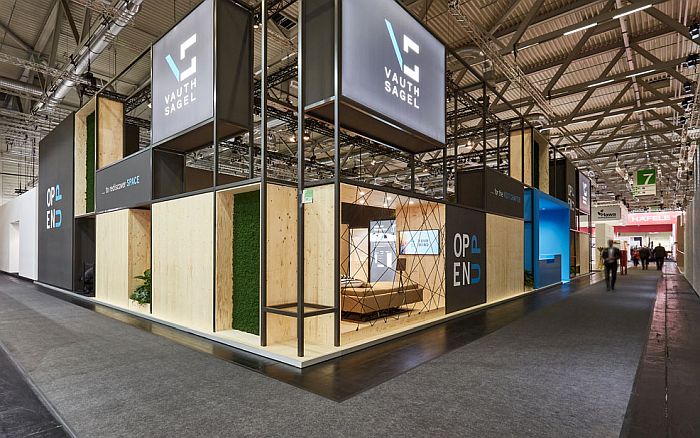 One of the most important insights of Interzum, which closed its doors on 24th May 2019, is that the furniture industry needs suppliers who are ready for maximum flexibility. If the different functional areas are increasingly merging into one another, furniture that allows for this development is needed – such as the products that Vauth-Sagel brought to Cologne to illustrate the trade fair motto OpenUp.

This intention can be illustrated particularly well by the highlight of the trade fair, the new, modular system VS Elements. VS Elements, which “thinks” from the inside out, can be found in all living areas. The system modules act as an open dressing room in the bedroom or as a modular organisation system in the bathroom or kitchen. Shelves made of wood or glass make the system frame into convenient storage, combined with a wire basket for practical hanging – and it can be replaced and rearranged at any time, depending on your stage of life and personal requirements. Thus, Vauth-Sagel’s new development impressively demonstrates how a single system can be used in all rooms and in all life cycles.

In 2019, the world’s leading trade fair Interzum was not only even more international, setting new records with respect to both the exhibitors and the visitors; there was also every reason for Vauth-Sagel to be happy with its own performance at its stand, which had grown by almost 100 square metres again this year. With its combination of natural wood, moss surfaces and the grey colour of the corporate identity, the stand radiated a special atmosphere. The different elements of the stand design were coordinated down to the last detail, providing an overall impression that clearly stood out from the crowd of the exhibitors. Many visitors were attracted by the concept of opening up all living areas so that they merge into one another. Therefore, the stand was very popular throughout the four days of the trade fair.

Vauth-Sagel has taken part in Interzum for 20 years and has recorded a continuous growth over the entire period. This year, the visitors were even more numerous, even more international – and the time they spent at the stand increased too. Around 2,000 customers and partners and more than 50 journalists from across the world made the most of the opportunity to view the innovations at close proximity and to engage in dialogue with Vauth-Sagel. Many of them returned, after an extensive tour of the fair during the day, for a longer discussion in a more relaxed atmosphere in the evening.